For example, you might want to find the least expensive product after sorting a product list by price. 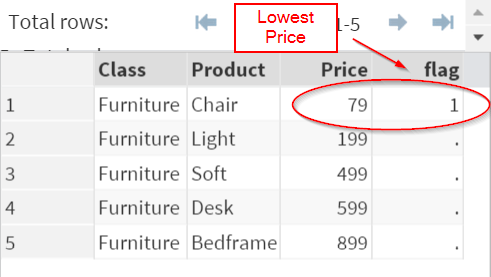 ​
Or you might want to find the most powerful car after sorting the data set by horsepower. 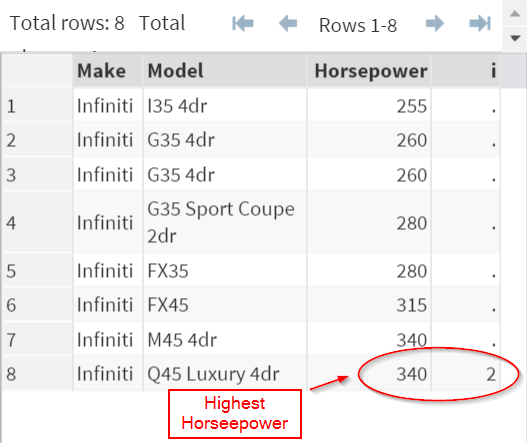 You can do so by using a common SAS programming technique demonstrated below. 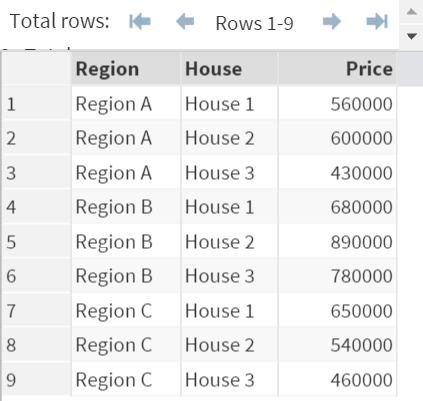 The HOUSE data set above contains 3 variables:
Since the data set is small, you can easily identify the cheapest house in each region. 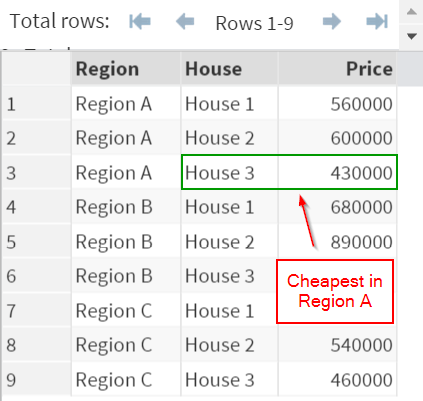 However, when you have a larger data set, say, 100 observations, identifying the lowest values wouldn't be as easy, if not impossible.

Instead, you can use a special technique that systematically identifies the lowest house price in each region.

Data House2;
Set House;
By Region Price;
If first.region then i=1;
Run; 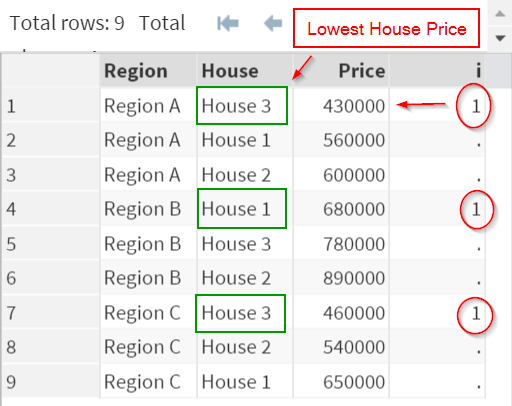 The code systematically flags the house with the lowest price in each region.

When (i=1), the observation is the house that has the cheapest price in the region.

1. The code first sort the data by REGION and PRICE. 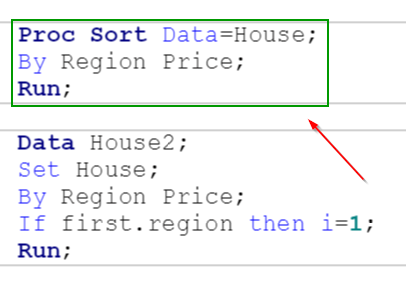 Within each region, the house price is sorted in ascending order. 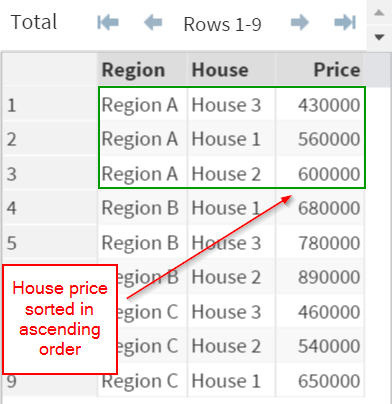 2. It then creates a new variable "i" that flags the first observation from each region. 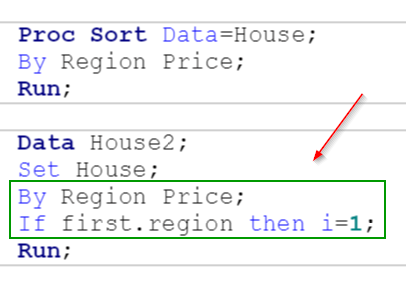 Within each region, the first observation is flagged. 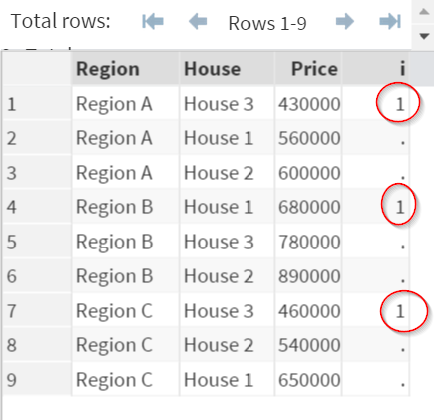 Because the price is sorted in ascending order, the first observation happens to be the one that contains the lowest house price in each region: 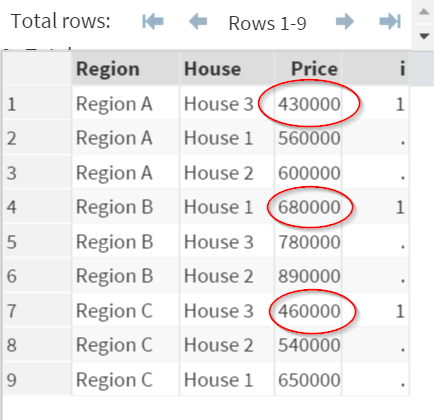 (try it!)
​
The variable i correctly flags the cheapest house in each neighborhood.

Similarly, you can flag the house that has the highest selling price by flagging the last observation from each region.
​

Data House2;
Set House;
By Region Price;
If last.region then i=2;
Run; 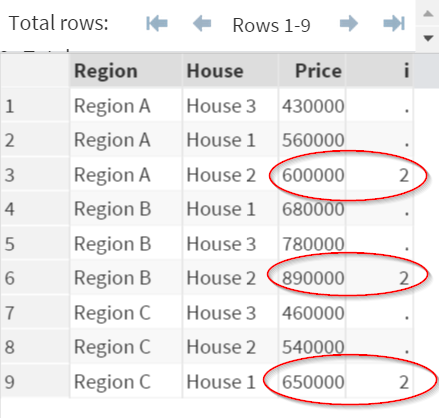 The variable "i" again correctly flags the house with the highest selling price.

​
Key Requirements
​​
There are 3 key requirements for this technique to work:

Requirement #1:
​
Data set must be first sorted by the grouping variable(s) and the result variable(s). 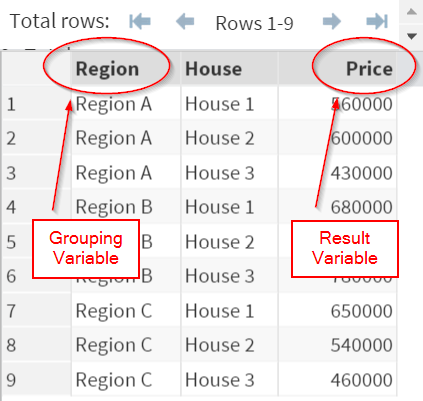 Grouping variable(s) is the variable that defines the groups in the data set.

In our example, the grouping variable is REGION.

Result variable(s) is the variable that determines the order within the grouping variable(s).

In our example, the result variable is PRICE. 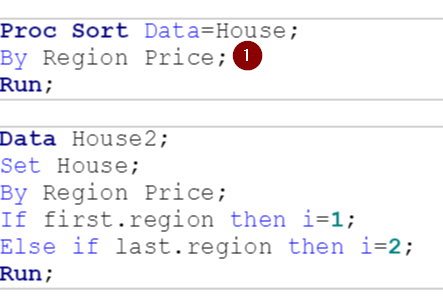 ​The data step must include a BY statement with the grouping variable(s) and the result variable(s). 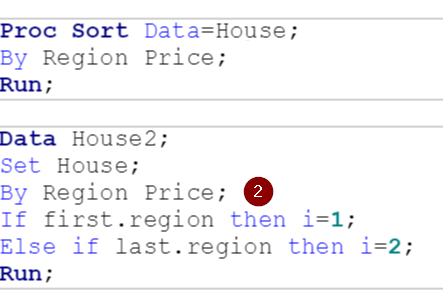 In our example, the data step includes a BY statement with REGION and PRICE.

​Use the IF.GROUP condition to identify the first and last observation within the grouping variable (i.e. REGION). 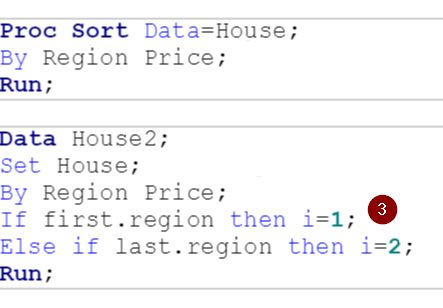 In our example, we have the following conditional statement:

This tells SAS to flag the observation (i.e. i=1) if it is the very first observation from each region.

Similar for the second conditional statement:

This tells SAS to flag the observation (i.e. i=2) if it is the last observation from each region. 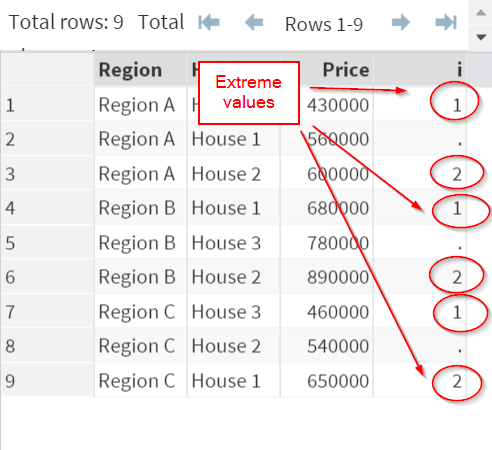 As a result, all of the observations with extreme values (highest and lowest price) are flagged.
​

​Note: use this technique with caution and make sure your code meets all 3 requirements stated above.
Exercise

Locate the FISH data set from the SASHelp library.

Create a new data set that contains only the heaviest fish from each species.
Next
Need some help?