However, the data has been split into different tables.

With data step, you will have to first merge or concatenate the multiple data sets before summarizing the data using a proc step such as Proc Means or Proc Freq.

The same task can be achieved more efficiently within a single proc step using Proc SQL.

Let's look at an example.

Copy and run the code from the yellow box below:
The HR table contains a list of 10 patients and their associated heart rate. 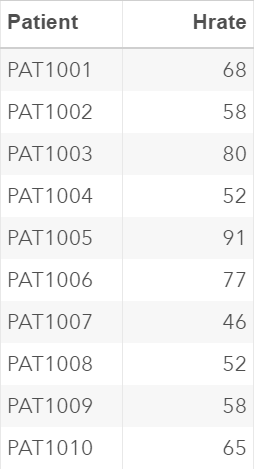 The GENDER table contains the same list of patients and their gender:

We are now going to compute the average heart rate for each gender.

With the data step, we will have to first merge the HR and GENDER data sets before computing the average heart rate by gender.

This will require multiple steps to sort, merge and summarize the data.

With Proc SQL, this can be done within a single proc step.

Below is an example.
Proc sql;
select gender, mean(hrate) as avghrate
from HR as h, Gender as g
where h.patient = g.patient
group by gender;
quit;
This will give you the average heart rate for each gender:

Let's look into how the code is processed.

SAS first performs an inner join between the HR table and the GENDER table. 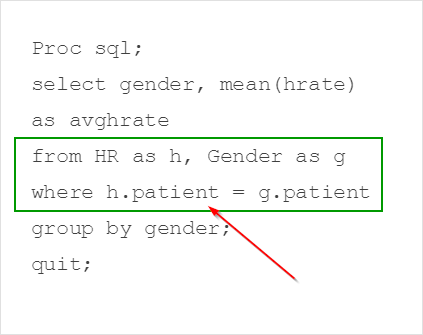 The table, although not shown in the output, would look like this: 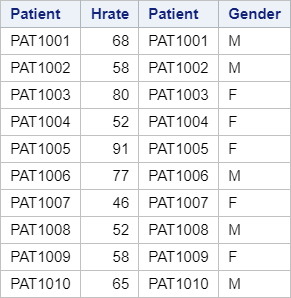 The summary function in the SELECT clause then computes the summary statistics on the heart rate for each gender: 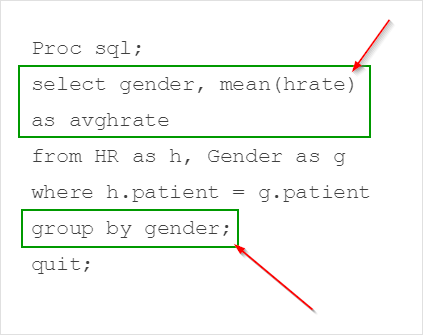 The heart rate is computed for both the male and female patients.

Note: below is how you would achieve the same results using the data step:
proc sort data=HR;
by patient;
run;

Copy and run the code from the yellow box below:
The code above creates two tables:

Write a Proc SQL step to compute the average rating for each customer service agent.

Which agent receives the lowest rating among the three?

Next
Need some help?


HINT:
Perform an inner join on the two tables by matching the ID column before summarizing the rating column.

Agent 3 has the lowest rating among the three with an average rating of 2.04.