SASCRUNCH TRAINING
Data Analysis [1-15]
(Samples)
Proc Univariate
​
​The first step to data analysis is to look at the shape and distribution of the data.

This can be done by using Proc Univariate.

Copy and run the DEMO data set from the yellow box below. 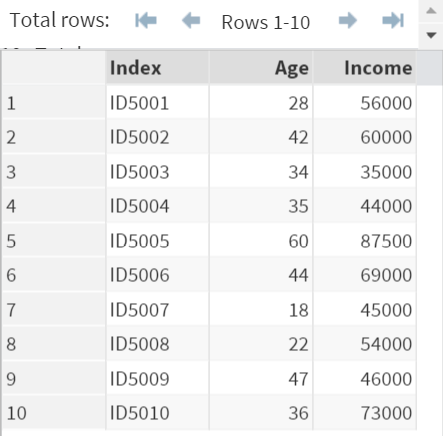 The DEMO data set contains a list of event participants along with their age and income.

Now, enter and run the code below on SAS Studio:

In statistics, a moment is a measure of the shape of the data.

The second table shows the basic statistical measures such as:

The tests for location are the hypothesis testings on whether the population mean is significantly different from zero.

The three tests for locations are:
4. Quantiles 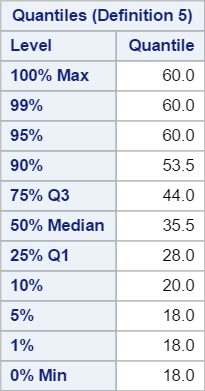 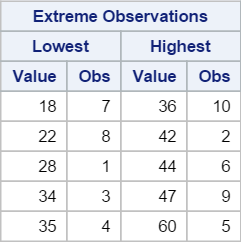 The statistics give us a good idea of how the data is distributed.

The average age of the events participant is 36.6 with the standard deviation of 12.4.

The skewness is 0.3133, which shows the distribution being slightly skewed to the right.

The kurtosis is 0.1568. This indicates a "flat" distribution as opposed to a "peak" one.

Understanding the distribution of the data is an essential step prior to performing the more complex statistical analysis.

Proc Univariate is a quick way to do just that!
Exercise

Take a look at the DEMO data set again.

Briefly describe the distribution of the INCOME.
Next
Need some help?


HINT:
Simply use the code covered in this session as a template and you should get the correct results.

The distribution is slightly skewed to the right (skewness: 0.6472)