SASCRUNCH TRAINING
Sentry Page Protection
Please Wait...
Statistical Analysis [3-7]
Paired t-test
A paired t-test can be used to compare the means of two populations where the observations come in pairs.

It is often used when comparing the "before" and "after" results. 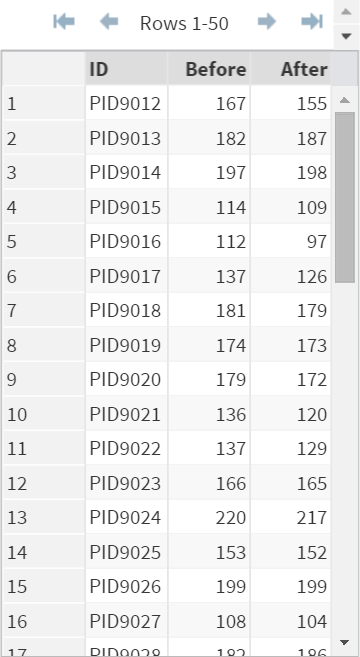 A weight loss product claims to have a significant effect on helping people lose weight.

An independent committee has conducted an inspection and selected 50 healthy participants who have used this particular weight loss product.

Their weights were measured before and after they have used the product and the results are captured in the INSPECTION data set above.

The INSPECTION data set contains the following variables:
The following hypothesis is being tested:

The paired t-test can be done by using Proc ttest with the PAIRED statement.

The PAIRED statement should list the two paired variables separated by an asterisk (*).

Run the program above and the following results will be generated: 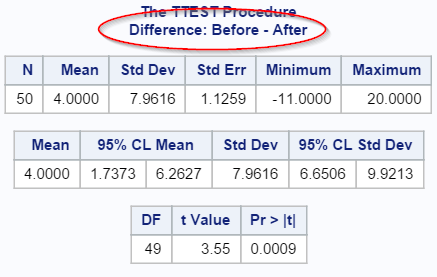 Some basic statistics are generated for the difference between the before- and after- results.

This rejects the null hypothesis that the difference in weight loss is zero (no effect).

The p-value of 0.0009 also rejects the null hypothesis.

Looks like the weight loss product is indeed effective. 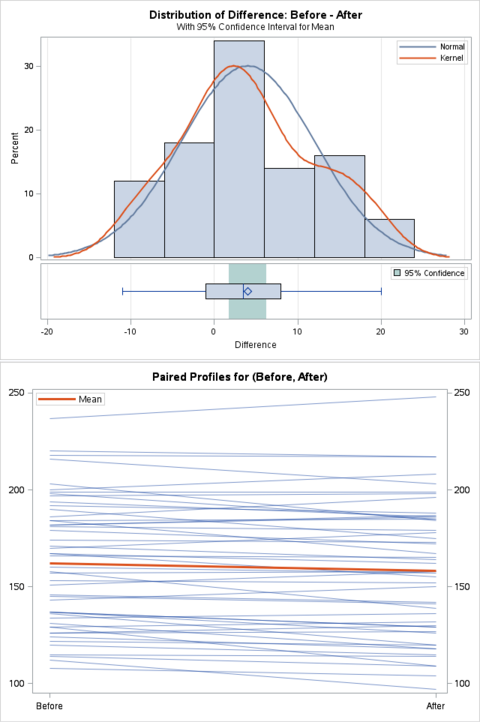 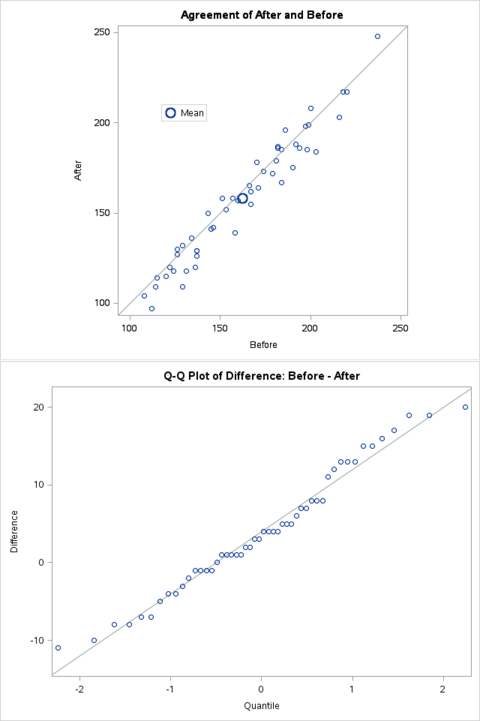 Some of the related graphs such as the histogram and the Q-Q plot are also plotted.

One of the main assumptions for paired t-test is that the difference should be approximately normally distributed.

The linear pattern from the q-q plot suggests the difference is normally distributed.
Exercise

A study is conducted to find out if the groupon campaign is profitable for the restaurants.

2. N_Bfr
The average number of customers the 3 months prior to the groupon campaign

3. Profit_Bft
The average profit made per customer the 3 months prior to the groupon campaign

4. N_Aftr
​The average number of customers the 3 months after to the groupon campaign

5. Profit_Aftr
the average profit made per customer the 3 months after to the groupon campaign


The total profit before and after the groupon campaign can be calculated as:

Where
Perform a paired t-test to compare the total profit before and after the groupon campaign.

Is the campaign profitable for the restaurants?
Next
Need some help?

The restaurants, on average, make about $1,900 less after the campaign. The p-value is 0.0001, which demonstrate sufficient evidence that the campaign lowers the total profit for the restaurants.