SASCRUNCH TRAINING
Sentry Page Protection
Please Wait...
Time Series Modeling
​[15-15]
In this section, we will go back to the SALES data set we worked on in the beginning.

We will build an ARIMA model to forecast the total sales based on the sales record over the 60-day period.

If you haven't created the SALES3 data set, copy and run the code from the yellow box below:​
We will first use the ARIMA procedure to check whether there is autocorrelation in the time series.
proc arima data=sales3;
identify var=totalsales;
run;
quit;
From the descriptive statistics, we see that there are 63 observations in the SALES3 data set with three missing values.

The average daily sales is around $300 with a standard deviation of 88.85.

This concludes that the series is purely white noise:

Since the time series does not show any systematic pattern, we could simply assume the daily sales resolves around $300 with a standard deviation of $88.85.

The future daily sales are predicted to be $300 for the foreseeable future.

This is the same as fitting an ARIMA (0 0 0) model to the data with no differencing, AR or MA term.

We will now add an ESTIMATE statement to the ARIMA procedure and look at the results:
proc arima data=sales3;
identify var=totalsales noprint;
estimate;
run;
quit;
The parameter estimate for µ (mean) is $300.83.

This is the mean of the entire time series:

Are we done? Can we get a better model?

Let's look at the residual, which is the difference between the actual value and the predicted value.​
proc sql;
select totalsales, forecast, residual
from test;
quit;
You can see that some residuals are fairly large.

Some of the sales predictions are off by more than $100.​ 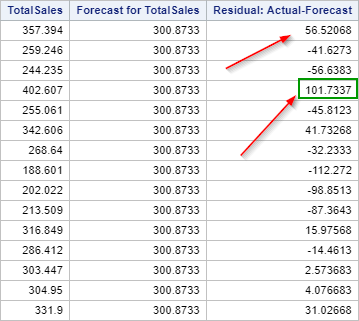 Maybe there is a model that does a better job in the sales forecast.

In section 2, we have learned that Monday's sales are substantially higher than the rest of the week.

Let's look at the tables generated.

The p-values from the Ljung-box test are still at an insignificant level:

​Let's look at the ACF and PACF plots: 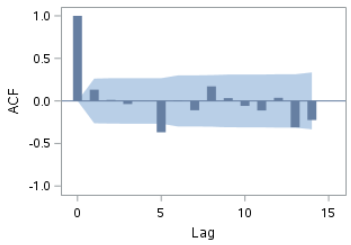 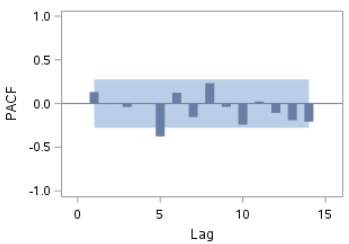 Both plots show a spike at lag 5. However, based on the Ljung-box test, we cannot reject the null hypothesis that the residuals are white noise.

The residual plots look worse. However, let's look at the AIC and SBC:

The MAE and RMSE are much lower! 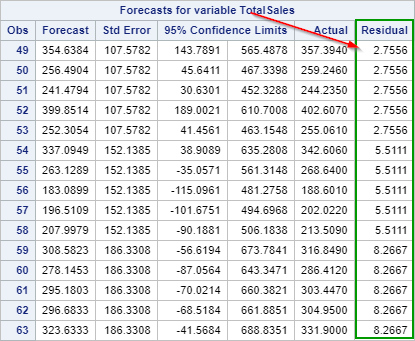 The residuals are mostly under 10. The sales forecast is off by less than 10 at each of the time points.

Note: the residuals look too clean to be real. We suspect the sales data set might have been systematically generated, as opposed to being obtained as an actual sales record of a business.