Differencing can often be used to stabilize the mean of a time series.

​Let's look at an example below.
The EX2 data set contains a list of simulated values:

The mean of X does not stay constant over time: 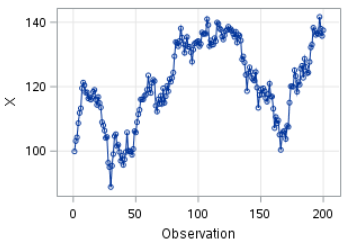 The ACF also shows a slow decline at longer lags: 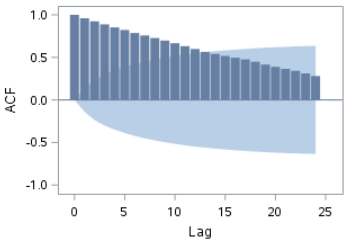 One way to stationarize a time series is to do what we called differencing.

Differencing is subtraction of the variable X by its own lagged value.

Let's look at an example.​
data ex2a;
set ex2;
Y = dif(x);
run;
The DIF function in this example computes the difference between X and its own lagged value.

Differencing helps stabilize the mean of the time series.

It stays near 0 over time: 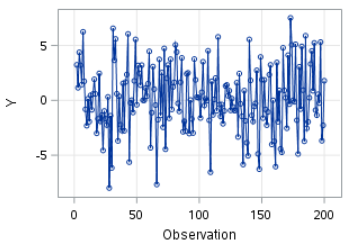 ​The ACF plot shows a sharp drop at lag 1.

The autocorrelation also seems to stay constant over time: 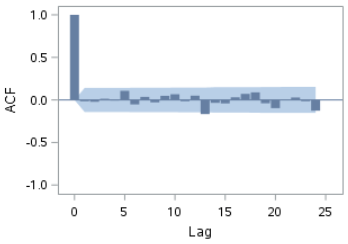 Note: in this example, we have manually computed Y, which is the difference between X and its own lagged value.

This step is not necessary.

Differencing can be done in the ARIMA procedure. 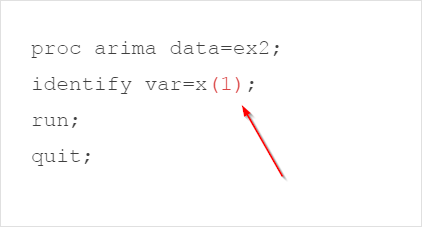 This tells SAS to perform one order of differencing.

The ARIMA procedure above will generate the exact same result as we had before (without manually computing Y).

(try it!)
Let's look at another example.

Copy and run the code from the yellow box below:
The EX3 data set again contains a list of simulated values for X:

There is a clear upward trend that makes the series non-stationary. 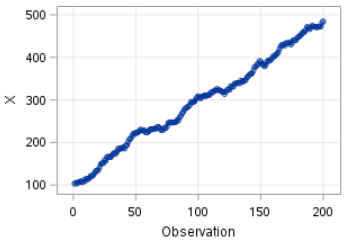 Again, we are going to stabilize the mean by one order of differencing.
proc arima data=ex3;
identify var=x(1);
run;
quit;
The series now shows a more stable mean: 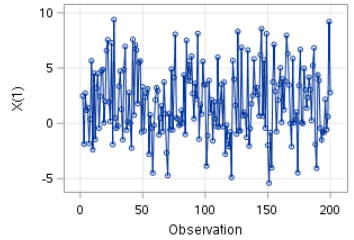 Differencing does not always stationarize a series completely.

The movement of X is quite irregular. 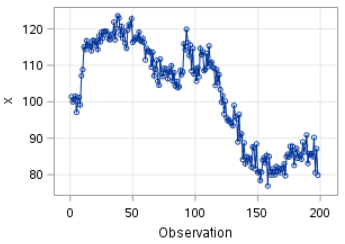 The ACF also shows a slow decline to zero.

This is another trait that shows the series is not stationary. 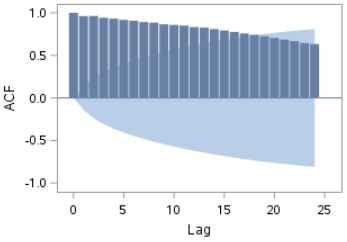 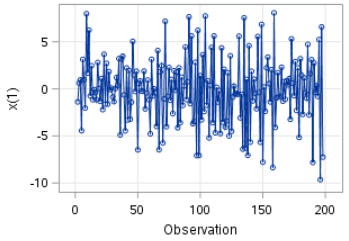 However, the ACF plot shows spikes at lags 1 and lag 2: 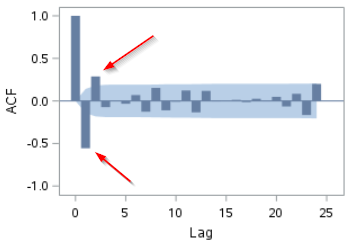 Overall, there is a huge improvement on stabilizing the mean of the series.

The spikes on the ACF plots will be modeled using additional parameters in the ARIMA model.

​This will be discussed in the next few sections.
Exercise

If you haven't created the SALES3 data set, copy and run the code from the yellow box below:
Plot the ACF for the order type A (i.e. ORDERTYPEA variable).

Is the time series stationary?

Perform a one-order differencing if the series is not stationary. Do you see any improvement?
Next
Need some help?
Fill out my online form.
Already a member? Go to member's area.